This is an epic one, fam!
We bought two identical 350z’s and have been modifying them to be FUN, daily drivers that you can take to the track. Team Hi (James Pumphrey & Zach Jobe) get the expensive parts and Team Low (Nolan Sykes & Aaron Parker) get the cheap ones. Then we test them to see which components are actually worth spending the money on.
If you want more power out of your Z, you really have to go forced induction. Which basically means, forcing more air into the engine to get more combustion. So in this episode we're installing turbochargers.
Hi Team went with a Jim Wolf Technologies twin turbo kit. It’s high quality across the board. Best materials, it’s been through lots of R&D, everything should bolt up easily. But it’s $8000 DOLLARS! That’s more than we paid for the actual car! Can that possibly be worth it?
It comes with two Garrett GT25 turbos. Garrett is one of the most trusted brands of turbo. It also comes with all the piping, plumbing and pieces you could ever ask for. Sometimes with these kits, the plumbing won’t fit quite right so you’ll find yourself having to do fabrication or calling your friend who knows how to weld. But with this expensive kit, theoretically everything should bolt right up and we won’t have to get our Tinker Boyz on. Part of that $8000 price tag.
It was designed to be an OEM+ set-up with OEM reliability in mind, which means it shouldn’t require a lot of attention from you once its in--another benefit. It comes with its’ own piggyback box which talks with the car’s ECU or computer, and the right one can save you a lot of time and effort.
These turbos are good for up to 530 hp, which is beneficial in two ways. If you do choose to go FULL hot boi down the line, you won’t need to upgrade your turbos, you can just keep these. The other benefit is that because these are way more than what we’re going to be throwing at them, they’re not likely to be a failure point.
Team Low went with a Rev9 turbo kit, purchased on Amazon for $2400. It’s a single turbo kit. It comes with a turbonetics 60-1 turbo and a turbonetics evolution 38mm external wastegate. That’s one of the reasons we chose this kit. The turbocharger itself is the part of any turbo kit that is the most likely to fail. So even though this kit is “cheap”, I know with a name-brand, at least the turbo itself should be fine.
This kit only includes the hard parts and doesn’t come with any software to help tell the ECU what’s going on. So in addition to the kit, we also had to buy an UpRev software license.
We’re gonna show you our super long journey to get these things installed, then we dyno them to see who makes more power!

Some of our best videos ever are coming out soon, stay tuned so you won't miss a thing!
►Subscribe here: bit.ly/1JQ3qvO

Click here if you want to learn more about Donut Media: www.donut.media/

Donut Media is at the center of digital media for the next generation of automotive and motorsports enthusiasts. We are drivers, drifters, and car enthusiasts who love to tell stories. 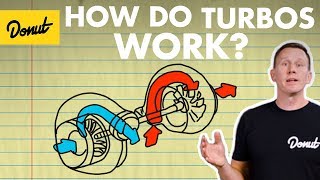 Turbos: How They Work | Science Garage 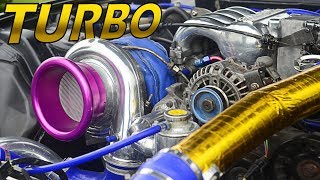 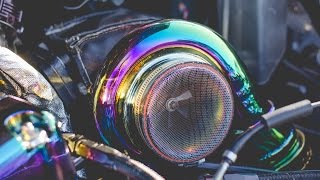 Loud Turbos: Spool Up & Blow Off

Crazy TURBOS That WILL Blow Your MIND! *5000HP*

Turbo Tech - What Do The Part Numbers Mean?